What happens to people who become so powerful, wealthy, and influential that no one is willing to tell them they are wrong? It’s a historical problem that has existed for as long as individuals have achieved great success.

Pardon the sexism in the phrase “Yes Men,” but it is a longstanding historical reference that describes a specific class of sycophants, acolytes, and hangers-on that manage to attach themselves to a powerful patron. At least the remora remove parasites from a shark’s skin; the suck-ups who attach themselves to a wealthy meal ticket serve no such purpose; instead, they tend to have a negative impact.

What is the problem with “Yes Men?” They tell their masters what they want to hear, fail to challenge their worst ideas, and generally encourage their boss’s own bad instincts. As we have seen in 2022, “Yes Men” are disastrous for titans of industry, billionaires, even monarchs.1

Some of 2022’s most disastrous situations occurred because these people failed to have anyone around to challenge or push them to come up with better solutions. They needed to have some “No Men“around.

This brings us to Elon Musk:

Up until recently, Musk has had a magical career: Paypal, SpaceX, Tesla, and now Twitter. The consistent theme amongst these companies is that he was a far-seeing visionary2 who stepped in to sprinkle some fairy dust on the enterprises. This led him to become the wealthiest person on earth.3

More recently, Musk made a series of dubious decisions leading to numerous unforced errors. From his numerous SEC violations (“Funding secured”) to smoking weed on the Joe Rogan show to the misguided and wildly overpriced “due-diligence free” purchase of Twitter, one must question the quality of counsel he receives when making major decisions. Or more likely, if he receives (or accepts) any counsel at all, other than from acolytes cheering him on.

This is a shame, but it has led to some entertaining results that will be studied in business schools for decades to come. Musk has burned through a lot of his professional cred and reputation, to say nothing of a giant pile of cash. Shareholders in Tesla are apoplectic over the damage he is doing to the $TSLA brand via his trolling on Twitter.

Did he not know before Sunday night that prospective Tesla buyers tend to lean Left? His ownership of Twitter seemed designed to alienate this group: He reinstated Trump, allowed White Supremacists and Nazis back on the platform, then suspended actual journalists.

Musk deserves credit for driving the EV revolution. He has forced the entire automobile industry to aggressively move into not merely hybrids but full EVs. We are all better off for him having done this.

But the world has changed since: During the 2010s, Tesla was a decade ahead of every other automaker in terms of software and hardware, including battery technology, over-the-air updates, user interface, self-driving, and more. There was almost no competition during that period; today, we see a massive push into the EV space from major legacy automakers creating compelling innovative electric autos. Ford, Hyundai/Kia, GM, VW/Audi/Porsche, Mercedes, BMW, etc. To say nothing about competitive startups like Lucid and Rivian.

Tesla’s stock has fallen 56% since his dalliance with Twitter began in January of 2022 – far more than other big-cap tech stocks have. Sure, it was wildly overvalued, beforehand, but I doubt the timing of the fall is a mere coincidence. 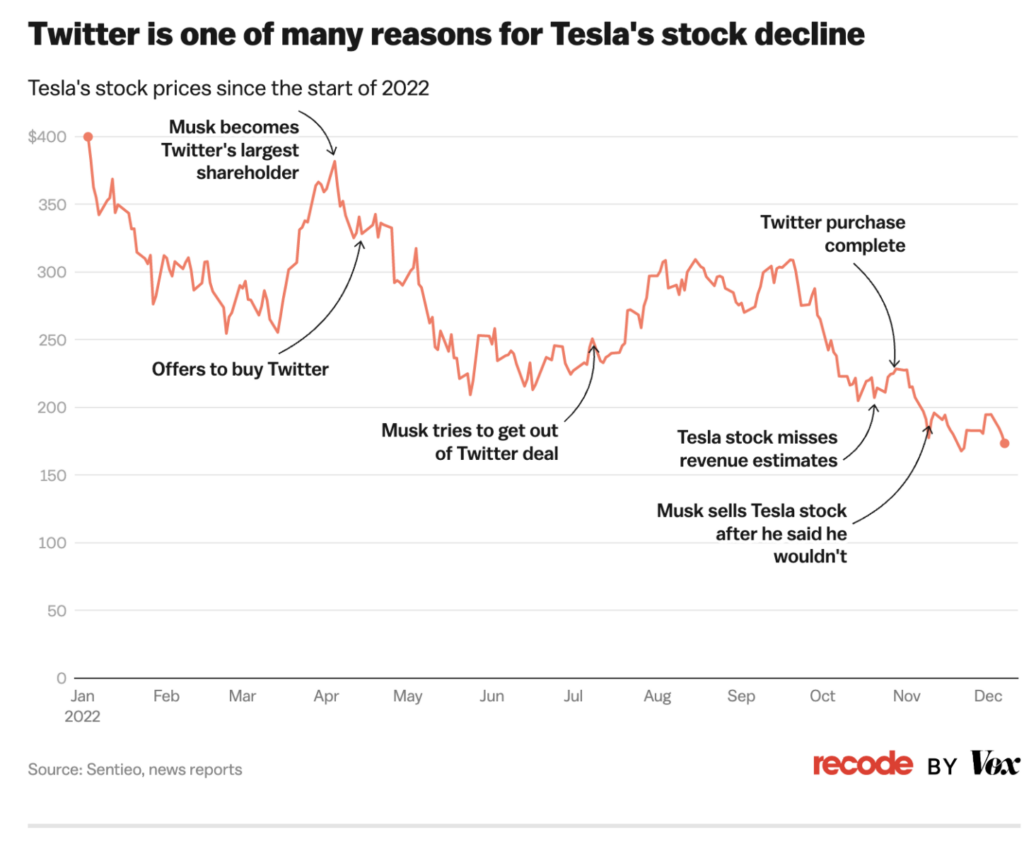 Owning the Lib’s turns out to be a terrible strategy if your company is a darling of those same Libs who are deeply concerned about global warming. If Musk was purposefully trying to damage Tesla’s reputation, I doubt he could have come up with a better plan short of converting the EV company to one based on Internal Combustion Engines.

2022 witnessed numerous other people who refused to take good advice or simply never get to hear any. It’s obvious Vladimir Putin was surrounded by “Yes men” who failed to give him an accurate assessment of his military — either before his disastrous invasion of Ukraine began or how it was going since the war started. One gets the sense that donald trump keeps his own counsel, and ignores good advice from others. Perhaps his razor-thin 2016 victory made him believe he did not need to listen to any experts, leading to more “Outcomes over process” decision-making. The results have been disastrous for the GOP as well as Trump’s own legal circumstances.

Making decisions by polling your 122 million followers on a Sunday night is no way to make an intelligent decision about corporate leadership. Unless it gave you an excuse to do what you were going to do anyway.

Too bad Musk did not have any “No Men” around; I suspect they would have had him do actual diligence before purchasing a $44B toy; they would have counseled him not to foolishly buy (overpay) $44B for Twitter. Then, having made each of those two prior mistakes, they would have told him to walk away for a mere $1B.

How do you make your important decisions? How do you take counsel form? When you are confronted with challenging business decisions, do you make these crucial decisions based on some sort of process? Do you seek a variety of varied ideas and inputs? Or do you simply go with your gut, and let the chips fall where they may?

What makes the Musk/Twitter/Tesla debacle so fascinating is that it is less about automobiles or social media or business. Rather, it is about the nature of decision-making, and how we as people operate when we have to make important choices.

The Yes-Men have taken over the Trump administration (Brookings, November 5, 2019)

1. Assuming The Crown is to be believed… I am aware it takes liberties with accuracy but in the broad outlines, it is intriguing. A fascinating aspect is Queen Elizabeth’s awareness of the Machiavellian court is her awareness of being insulated from the public – the staff even pull the newspapers that are critical of her from her sight. But she goes out of the way to seek counsel from people who give her the straight dope, she cultivates “No Men & Women” regardless of the discomfort it might cause.

2. Musk is the founder of SpaceX, circa 2002, but he was not a founder of the other three.