While most global investors and FX traders tend to focus in on the monetary policy decisions of major central banks in the throws of significant adjustments (such as the Federal Reserve, European Central Bank or Bank of England), the markets have all but written off the possibility that Japan’s monetary authority would be changing its rate at almost anytime in the future. While over a long enough horizon, the BOJ (Bank of Japan) will eventually have to adjust its policy settings, market based instruments used to assess timing show almost no premium to a hike through the foreseeable future. The group itself has made a very concerted effort to commit to its ‘yield curve control’ efforts which was on the extreme dovish end of the monetary policy spectrum even when other central banks were still sporting accommodative policies. With inflation running well above target and the divergence of other groups’ own policies creating problems through exchange rates, there is serious reason to believe that policy will change far sooner than the market is expecting. Further, given the market’s almost absolute complacency around even a symbolic tightening measure being pursued, there is the capacity for an outsized Yen response should even a hint of a hawkish path in the future bubble up at the meeting.

For the most liquid of the Yen crosses, USDJPY, we have seen the retreat from the October 21st peak at 151.94 unfold in small part due to intervention threats/actions but largely following the Dollar’s own considerable retreat. This one sided influence well reflects the moderation of interest rate expectations for the Fed into 2023, which contributes to the starts-and-fits movement that passes through into the pair moving from range to range. With the FOMC this past week making clear that their forecasts for 2023 are set higher than the market’s, there is a point of contention for which speculation will keep debate boiling. However, the BOJ’s perspective can offer something of an extreme skew in scenarios for event volatility ahead. Considering how thorough the view is for the BOJ to maintain its extreme dovish policy, confirming the near zero yield and effort to keep the JGB yield anchored would likely offer limited inspiration for USDJPY upside above 138. That would shift the responsibility back to the Dollar. That said, the same absolutism in the market’s view could generate a dramatic surprise if the Japanese authorities signal that they are raising their target range for the JGB and/or willing to allow the benchmark rate to lift off of zero to match inflation or global counterparts . We are a ways from the multi-month range low around 133.60, but such a development could cover that ground quickly.


of clients are net long.

of clients are clean shorts. 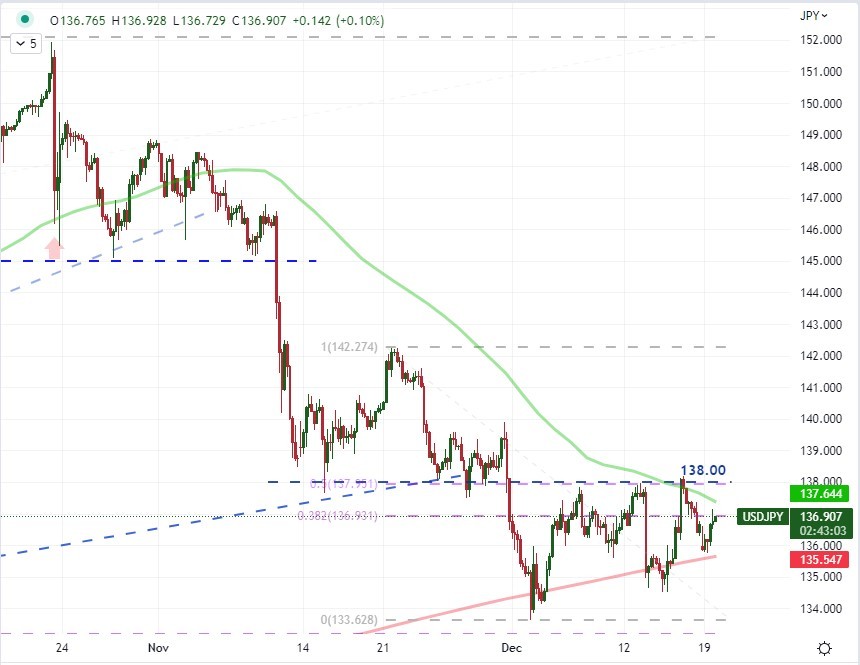 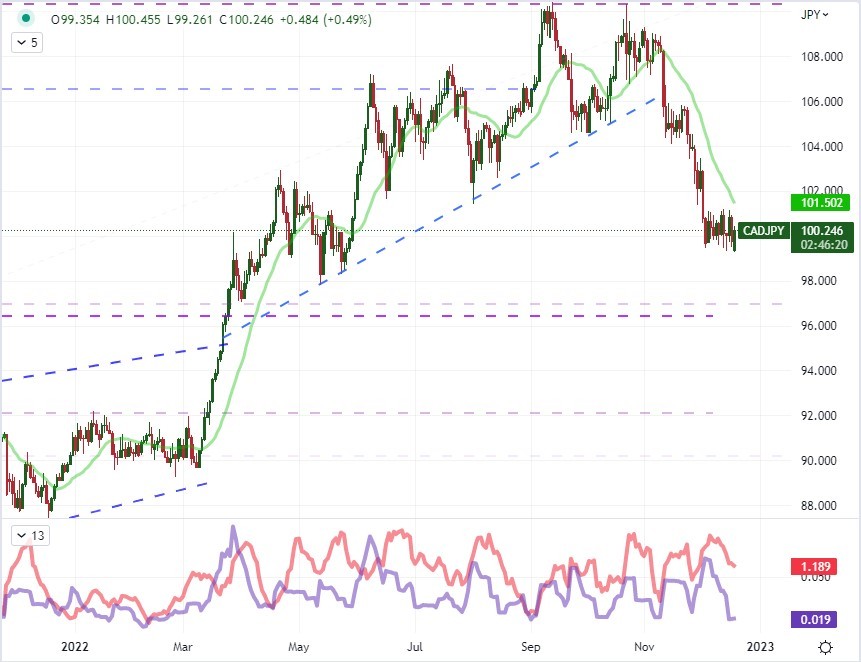 If you are looking for a pair that is even more fundamentally and technically oriented to an unexpected Bank of Japan ‘normalizing’ develop, take a look at AUDJPY. This is one of the most well-known ‘carry trade’ pairs among the Yen crosses from the past two to three decades. It’s relative position for actual yield is materially lower in the 2022 phase of policy tightening given the RBA’s relatively more constrained pace of hikes, but it still exerts a lot of weight in its position as a ‘major’ currency through this financial role. That said, if the Japanese central bank were to hint at a possible majority vote to hike in the proximate future, the exaggerated head-and-shoulders pattern developed over the past six months would make for a very overt technical picture. The ‘neckline’ on the pattern falls just below 91.00. 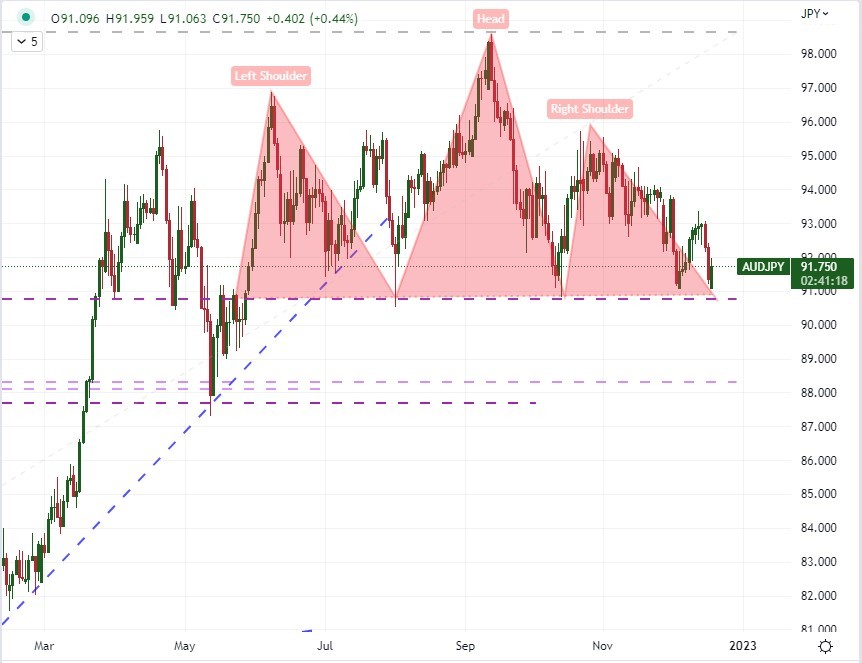 From a currency cross that is principally the reflection of the ‘base currency’ (first in the pair) to one that has heightened perspective from the technical and fundamental application side of the equation, I believe CADJPY is better suited for different outcomes. While there is a strong carry in favor of the Canadian Dollar – which has edged up with the language following the last BOC hike – the cross didn’t experience much lift from the news. The technical ‘legging’ down has been a notable retreat from 110 to the near midpoint of the 2022 range. What is more interesting however is the exceptionally narrow 20-day range we have seen on CADJPY. It has been the smallest since February, even though the ATR (average true range or realized volatility) over that same period has been far less reserved. There looks to be break potential here, but what causes it and what direction the market takes are open questions.