All-in-all, the ESR predicts the economy will slow negative 0.5%, and predicts it will return to positive growth in 2024 at a rate of 2.2%.

As weekly mortgage rates pull back amid a lower mortgage forecast, the latest data made Fannie Mae readjust their home sales forecast upwards and now expects the market to see 5.72 million units, up from a previously forecast 5.67 million units. Sales numbers in 2023 are predicted to be 4.57 million units and the market should bear 5.24 million units in 2024.

It’s a given fact that inflation is slowing due to the actions of the Federal Reserve as the latest CPI decelerated again from 7.7% to 7.1%. 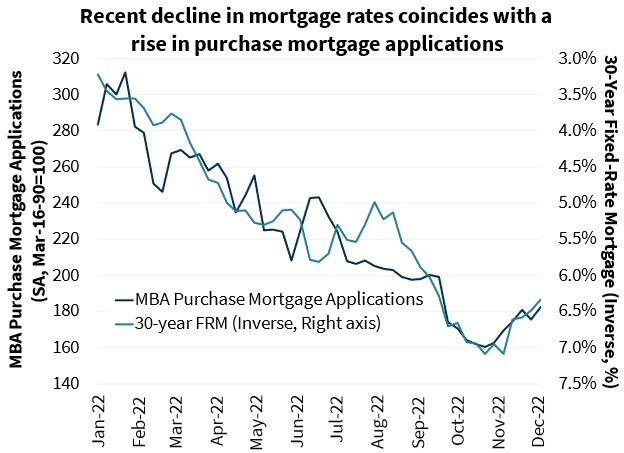 “The Fed has been consistent in its stated desire to loosen labor market conditions and thus slow nominal wage growth,” the ESR said. “Therefore, as long as the labor market remains strong and wage growth remains higher than what is consistent with a 2% inflation target, we believe the Fed will continue with restrictive monetary policy, further slowing the economy.”

Existing home sales continued to decline in October, falling to 4.43 million units, or 28.4% below numbers seen a year ago.

Despite all this, affordability remains highly stressed going into the new year. According to Fannie Mae the share of median household income needed to purchase a median-priced existing home at the current mortgage rate remains among the highest of all time. This limits home purchases and suggests that there are homebuyers on the sidelines waiting to act as soon as rates drop.

Still, the ESR has upgraded their new home sales forecast for 2022 and 2023 due to new data showing stronger numbers than expected due to an expected lower mortgage rate outlook.

Click here to read all of the ESR’s forecast.